Glide Utilities is a student bills company, allowing students to put all bills under one company, simplifying the process for students across the United Kingdom. The problem that Glide utilities had was that their sign up process was convoluted and needed a revamp, but the company didn't have a design department or any user experience strategy to properly determine the sign-up problem. The company contact me to setup a decent user testing strategy and implement a new design for the sign up process, whilst working closely with the Glide development and product strategy teams, as well as working with their Branding/Design agency. 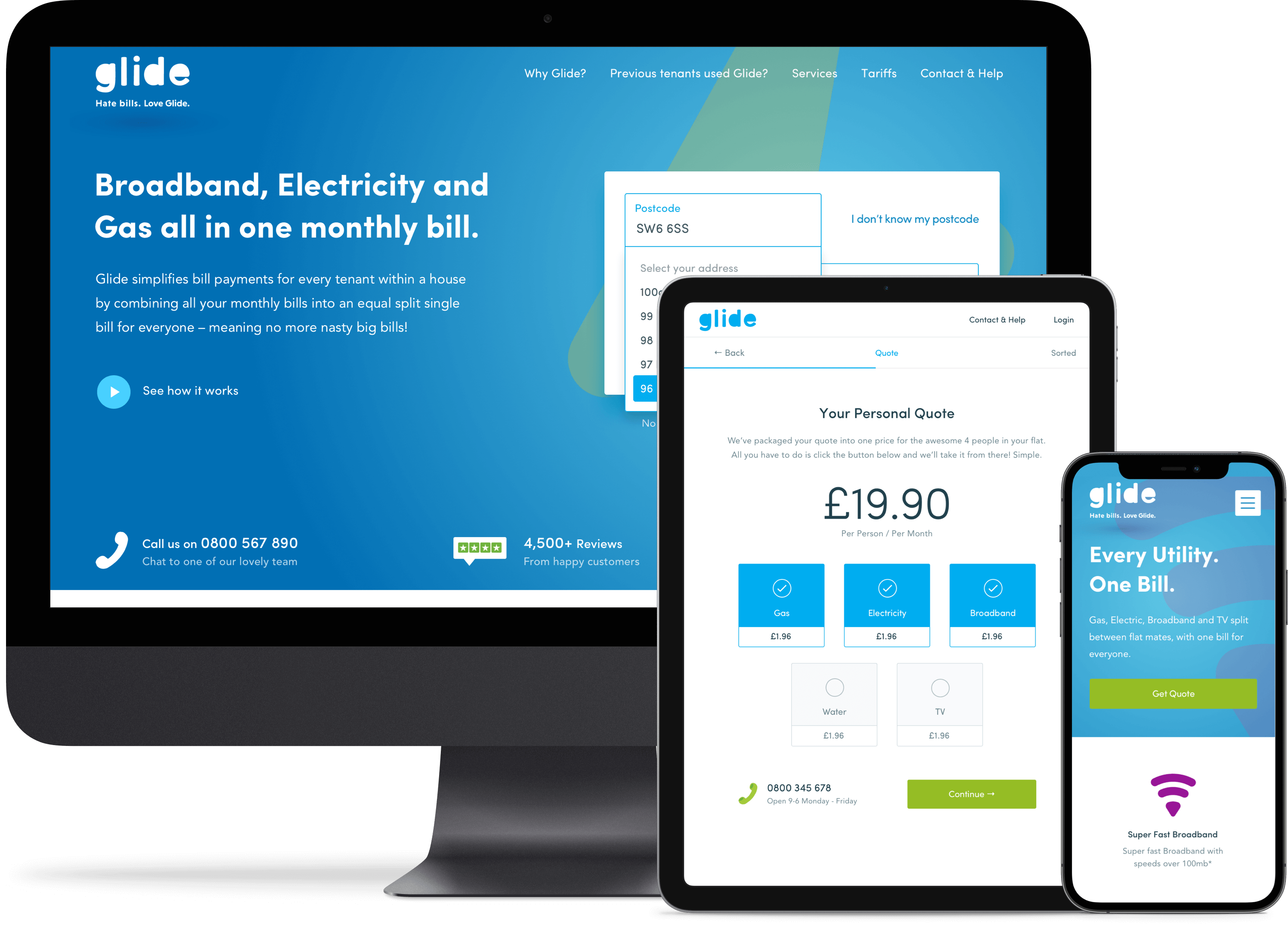 I worked through a design and testing strategy which was flexible enough to be managed by the product team given that the company did not have a design department. The company was mainly focused on data from Google Analytics and not on the user experience, my challenge was to merge the two and set the user story that's influencing the data.

After an initial meeting with the client, we set out the goal that the company was to achieve, which was to lower the drop off rates within the sign up form and implement a user testing strategy for the future. With this in mind, I set out to digest the quantitative data from Google Analytics and their internal data tracking dashboards.

I set out a plan to look at implementing some cheaper user experience tools such as Hotjar, giving me an insight into what users are struggling on within the sign up process. We also set out remote user testing, giving people the task of signing up with fake user credentials and seeing what people's decision process was when signing up.

After the testing came back along with some initial data from Hotjar, we figured the problem was that the form was long and strenuous for most students with limited time, the original sign up was also very heavy on loading times which meant students with poor connections could have difficulty loading the form.

The biggest improvement we could make was allowing users to come back to the form where they left off, as well as making the form multi-step to allow students to keep track of progress throughout, it also helped the customer service team know exactly what screen the users where on, which was a nice additional benefit.

I set out creating a small prototype of the new multi-step process, then placing it through another round of qualitative user testing with employee tests and remote testing. The feedback from the testing was positive and on average cut down time to form completion by roughly ~40%. Once confirmed with the team, we worked alongside the branding agency to apply the visual aesthetic. Once the visual's where applied and a final round of reviews, we handed over to the development team.

Overall, the Glide management team where extremely happy with the work produced and the communication throughout that they invited myself to redesign the entire Glide utilities website which you can see above. The new website was released and the metrics where reported frequently due to a A/B test not being available. The company saw a 15% conversion lift from the sign up process compared to the previous year, which was great news and the company shortly after was acquired.