Vouchertoday is a personal development project for myself, it was born as a small startup serving up voucher and discount codes from various API's. It taught me valuable development lessons as well as working with PHP and CraftCMS. The project was originally targeted to be a base to hone my Search Engine Optimisation (SEO) skills. From it's creation, Vouchertoday has been continuously growing and now brings in substantial revenue per calendar month, a long with a growing core user base. The project is live and kicking and you can visit it here.

The difficulty for Vouchertoday was designing the website to have a defining difference from all other voucher code websites around the web, as well as keeping the site true to it's primary goal of getting the user to a discount code quickly. 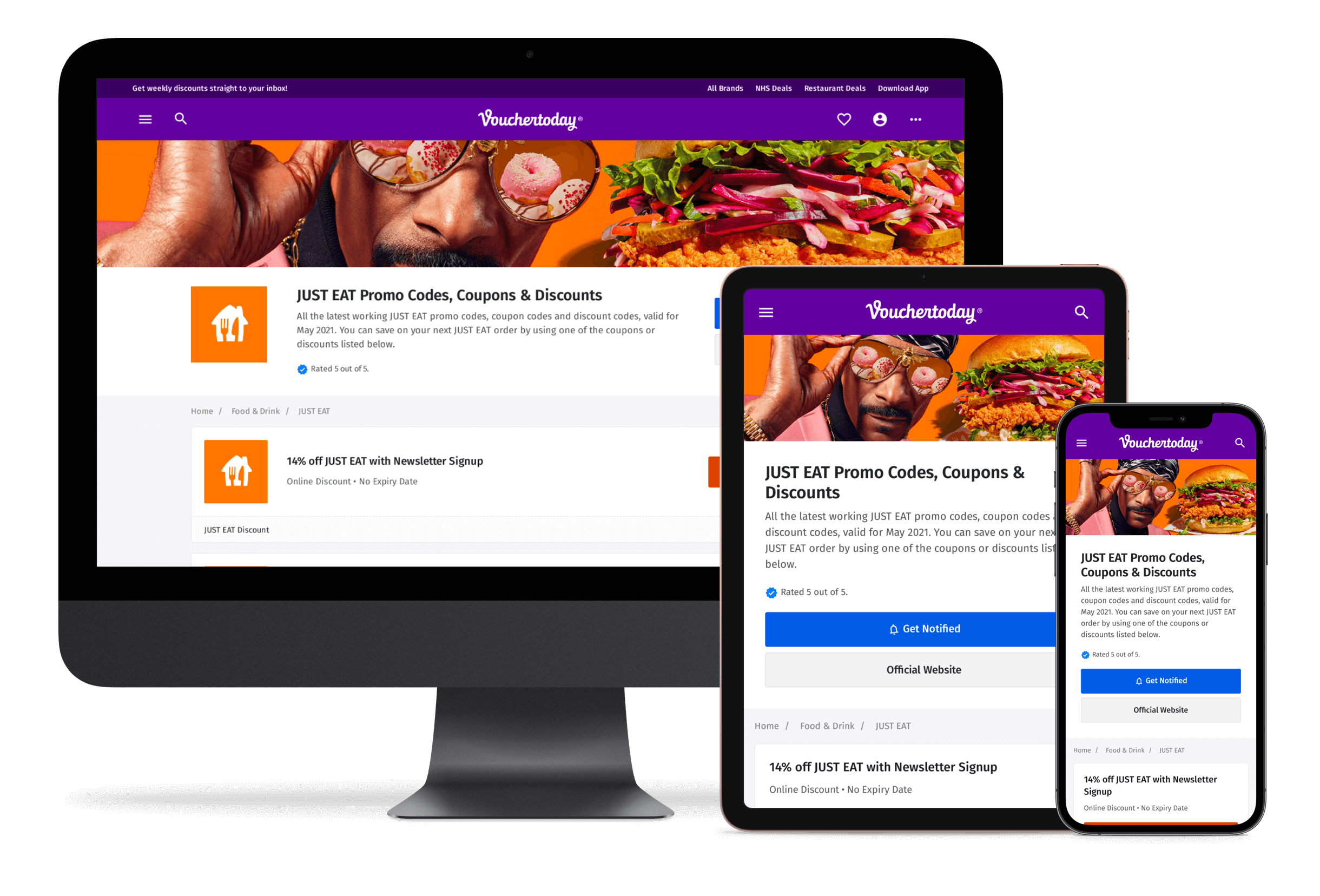 Vouchertoday Main Responsive Website
The website is fully responsive and caters for all devices without losing functionality. The Android Application also uses the interface as it's base interface. The website is also fully static cached so it achieves a Google Page Speed Score of 85+.

Even though it's a personal project, I tried to keep it on a path that's as close to a real world client project. First, was to set out some qualitative research on our competitors websites, figuring out what was good, bad and ugly. After digesting the competitor research, I set out to create the initial first version of Vouchertoday, creating wireframes and prototypes. Once the prototypes where ready to go, I put them through the "Parent Test", asking close family and friends to try it out and report back with any feedback using a survey. The feedback came back with mixed reports, with some wanting the code to be served upfront without the need to click or not even open the website and use some sort of Browser Extension. The problem with upfront codes was that the revenue is served on an affiliate click basis, it was a toss up between user experience and revenue generation.

Vouchertoday Chrome Extension on Nike.com
‍The Google Chrome extension fetches all the latest discounts and voucher codes from the website the user is currently visiting. It focuses on micro animations to keep the user entertained throughout the API response and load.

After much debate, I decided to create a popunder style effect, allowing users to instantly see the voucher code after a simple click, with the popunder loading underneath, it was unobtrusive with the user's current browsing. The pop under was a complex solution, but allowed me to hit both the user problem and a revenue generating issue in one, without annoying the user. Further down the road, after feedback from multiple users once released, I did end up developing a Chrome, Firefox and Opera browser extension, which to this day boasts over 10,000 users. The browser exension, also required a fair amount of user experience thinking as well as design. The extension had to be fast, display sometimes a large set of data within a small space, as well as generate revenue for the company.

Vouchertoday continues to grow using my structured user experience methodology and my increasing SEO skill set . Continuing to listen to my users and gather their feedback is key to growing the company further, pairing this with great design creates positive outcomes. Even though Vouchertoday is a personal project, it has taken me through my own user experience workflow as a client and I have looked at areas where I thought could be improved further. The early feedback received was instrumental in improving the business as a whole, even though it was a small qualitative testing, it still reaped rewards.


Whilst building Vouchertoday, I further expanded my development knowledge of CraftCMS and PHP. Creating a solid development and build pipeline using services such as Serverpilot and UpCloud with Cloudflare static caching. Development, Design & SEO come hand-in-hand, each one should interact and benefit from the other. e.g. A faster website, improves user experience and SEO.

You can visit Vouchertoday here.
You can download the Chrome Extension here.
‍